Too Much Junk In The Trunk 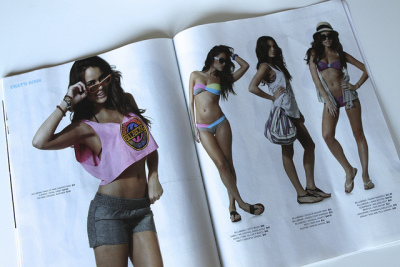 It’s killing me to admit it, but I’ve now got too much ‘junk in my trunk’ to wear surf fashion.

My unwilling bodily metamorphosis into middle age is cramping my enjoyment of retail therapy in a big way. I’ve lost the ability to recognise what looks good on this new bulkier frame that my hormones have handed me. I’m struggling to find an appropriate style to compliment the fifty-going-on-thirty mental image I have of myself.

I was in denial about both issues (shopping and body image), until recently, when the old man pulled me aside for a ‘chat’. That was surprising in itself, because conversation in our marriage is generally limited to simple key phrases like ‘what’s for dinner?’, and initiating conversation just isn’t the old man’s bag really, being the strong silent type.

But he summoned me into his ‘study’, (the area of the sofa cordoned off to allow him instant access to his selection of boy toys, namely, remote controls, iPad, iPod and iPhone), and informed me that we needed to have one of his, (yawn), ‘in-house’ finance committee meetings.

These meetings are usually locked in when I’ve been ‘irresponsible’ (his words) with the credit card. He has developed this domestic State of the Art tracking system, which involves 24 hour surveillance of our on-line bank account, that alerts him (catching me red-handed) to any overspending.

He’s an accountant, you see,  and apparently we don’t share the same ‘appreciation’ for money. His means of ‘controlling’ my spending can, nevertheless, be intimidating at times. On several occasions while paying for items at my preferred suppliers, (Witchery or Surfection for example), my phone has rung mid-transaction, with his voice booming down the line, “GET OUT OF THE SHOP, NOW!” And that’s deemed normal behavior in our house.

So I sulkily attended this latest meeting with trepidation, concerned that he might have found out the truth about my recent increase in cash withdrawals, which have not been for solely ‘necessary’ purchases.

Panicking that he was going to hide my magic gold card again, (nature’s gift from the money tree), my body naturally went into fight or flight mode, but instead, he began to express an uncharacteristic concern for the apparent decrease in my expenditure. Apparently, there had been a noticeable lack of any substantial entries in his (petty) household spreadsheet, and he was worried.

Worried that I might be hiding something from him, that something might actually be wrong with me. What other reason could there be for me to lose my passion for shopping? (The stack of medical receipts lining my handbag from my assortment of hypochondria doctors went some way to reassuring him that I was not about to die).

The truth of the matter is, I’ve lost my shopping mojo.

You see, all my favourite labels just don’t cater for my evolving shape, my bodily work in progress that now comprises of ‘mama jugs’, ‘junk in the trunk’ and a muffin top.

Try as I might to squeeze into their condensed designs, Barbie doll-sizing does not embrace the voluptuous/bloated physique. I may be petite in comparison to the national average, (if I get on the scales on a Friday night, before wine and Kettle chips), but I am too bulky for Surfer Chick Land. I think it’s a cunning strategy the manufacturers have for removing the dead wood from the driftwood. My shopping status has changed from Surfer Chick to ‘no spring chook’.

I’m gutted because back in my twenties and thirties, I aspired to the traits symbolised by those brands, when I was young, free, spirited…… and obviously thinner. And I’m not sure I’m ready to trade my maxi-dresses and tight-fitting jeans for baggy jumpers, tent dresses and elastic waistbands quite yet. I still believe I can rock an itsy-bitzy (hardly-covering-my-tits…bits) bikini.

But apparently today’s surfers are a bit fussier about muffin tops, rogue pubes and syphoned breasts.

Hipster jeans are a prime design culprit for separating the women from the girls, which let’s face it, is ageist. Low-cut, muff-skimming jeans, that require a weekly strim, are not flattering on the Rubenesque figure; It’s like forcing sausage meat through its casing.

I may be the ‘bigger’ person physically but I’m not mentally. It’s not only adolescents who have been seduced by the internationally-accepted, impossible standards of beauty projected in magazines. ‘Olds’ have feelings too, and the very thought of standing next to a size 8 version of my former self in a changing room, in front of floor to ceiling ‘fat’ mirrors, sweating from menopause and the effort of squeezing the ‘junk in my trunk’ into doll-sized clothes, makes me want to self-euthanize.

When retail therapy stops being therapy, you need to find something else.

I’m now diverting the old man’s funds into the pleasures pertaining to on-line wine and shoe shopping. I wouldn’t want him worrying about me.