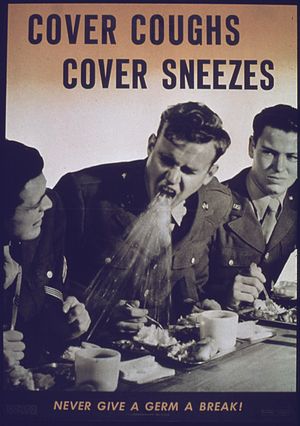 I’ve alluded to my reputation as ‘worst mother’ and ‘bitch wife’ in the dysfunctional family in previous posts.

Empathy doesn’t come naturally to me so sickness in the family fills me with abject horror.

I had a mother who worked full-time and we were brought up to believe that unless you needed hospitalizing, you went to school. If you did manage to wag a day off school, the guilt for causing Mum to have a day off work far outweighed the pain of any illness.

For while I admit to being the biggest hypochondriac in the world, (the type that moans about an ailment for weeks, gets all anxious about it only for the symptoms to miraculously disappear the minute I book a doctor’s appointment), I am intolerant to other people’s sickness and pain.

It unnerves me. Psychologically, I cope much better if I can convince myself that there’s absolutely nothing wrong with those I love.

Kurt has been coughing, sneezing and wheezing, (quite irritatingly so), on and off for the past six to eight weeks. He also consistently loses his voice, which is obviously quite problematic for a potential rock star while providing some relief for the rest of the family.

And Kurt is anxious like me. He is convinced he has cancer, while I have been trying to reassure him that it is a minor cold and that if he just replaced some of his Coco Pops meals with fruit and vegetables, he might actually get rid of it.

(When exactly do we become our mothers?)

Initially, I did try the ‘good parent’ approach of reassuring him with loving reassurances of ‘toughen up’ ‘you’re fine,’ then I succumbed to buying him Strepsils which I thought might give him some sort of psychological boost and finally I showed him where the Neurofen was kept.

Eventually I caved in and took him to the doctor.

After a lengthy discussion with Kurt about his lifestyle (hmmmm!), the doctor diagnosed him with a possible allergy to our house.

BECAUSE THAT’S REALLY SIMPLE TO DEAL WITH!

Apparently, a lot of teenagers (especially those who were asthmatic or suffered from eczema as an infant) develop allergies in their teens and our teenager (whose middle name is ‘trouble’) appears to have developed one from the multitude of microbes that inhabit our new ‘old’ house. Nothing to do with my lack of housekeeping, it’s simply that the house is old. The doctor discharged us with thousands of dollars worth of drugs that included an interesting selection of nasal sprays and a Penicillin. I assumed that the problem would be sorted.

I think Kurt managed two snot-free days and then the allergy/cancer came back with a vengeance.

Along with that annoying sniffle.

As it is Glee School’s ‘I want to live forever’ show next week and he needs some voice, the atmosphere in the house has been tense.

So when the old man began demonstrating similar symptoms later in the week, any traces of empathy on my part were shot.

As we watched Friends with Kids on Friday night, the old man began sniveling in the same irritating way as his son. Admittedly it was the third time I’d seen the film so I could have been more patient, but I love the cynical humour in the film about relationships and I didn’t want to miss it. (It reminds me of our own thirty-something decade when the initial joy of becoming parents was jolted into a massive reality check of how life and fate irreversibly changes with that one decision to have kids).

Let’s face it, parenting can be f*cking fraught at times. Not least when there is man flu in the house.

The old man didn’t want to watch the film at first because there were no guns or car chases in it, so during the last ten minutes when this sniffling noise began to rev up beside me, (not dissimilar to the noise Kurt had been perfecting for the last six weeks) and even my best ‘stop that ridiculous noise or I’ll make you stop right now’ look didn’t stop him, I thought he was trying to rile me. But when I shot him my best death stare, I suddenly realised that the old man was actually sniveling from emotion.

This is not a man who is particularly emotional at any time except during sport on tv. This is the man who told Nerd Child not to let her team down and get back on the pitch when she broke her collar bone playing soccer; the man who ridiculed me when I needed to be sedated after sobbing through the whole ninety minutes of ‘My Sister’s Keeper’.

‘Why didn’t you tell me this film was so sad,’ he sniffed pathetically as the main couple finally got it together at the end of the film, wiping away his streaming eyes.

Which just goes to prove that you never really know a person, no matter how long you are forced to live with them.