Do Women Really Want To ‘Have It All’? 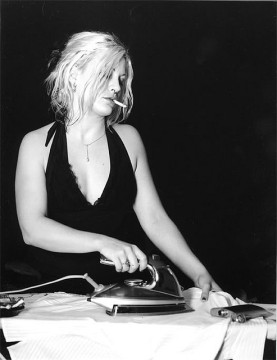 This week I have decided to question the premise of women ‘having it all.’

And I’ve decided that ‘having it all’ isn’t ‘all that’.

Because the Perfect Mother medal in my cupboard and the ‘thank you’ email from that bitch of a client, hasn’t brought me the fulfilment I thought it would.

‘Having it all’ has its limitations.

It’s not like I’ve even lost any weight from the stress of it, which begs the question of what exactly I am supposed to be gaining, apart from a highly fraught existence.

There’s certainly no work/life balance to speak of.

The old man dared criticise my aptitude for house cleaning this week – a bit rich considering my pleas for a cleaner some time ago (here).  I knew something was simmering, because he develops this very loud tut when he’s cross. He tutted first when he had to empty the recycling bin, and then again when he discovered that I hadn’t ironed him any clean shirts for work.

Obviously I ignored the insinuated criticism.

After a few wines he grew some balls and came out with it. He said the house looked like the ‘back streets of Calcutta’.

Which I felt was a bit harsh.

Admittedly, the kitchen did look like some earthquake had hit the North Shore during lunch, but in my defence, it is the school holidays at the moment and our precious teenage babies can’t be expected to clean as well as grow, can they? I didn’t think the milk had been left out THAT long – I carried out the sniff test and it passed for hot drinks.

He was obviously just having a bad day. Apparently he was down a few seconds on his running time home from work and you know how maddening that can be?

Frankly, I couldn’t give a flying fuck about whether the house is clean or not, but it still stings to be criticised.

But made me realise that I’ve got too many balls in the air at the moment.

Trying to ‘have it all’ is exhausting sometimes.

We women are always trying to be the perfect mother, friend, colleague and partner. Sometimes it’s fun to rebel, kick off your shoes, become a bit more Bohemian and let the mess reproduce, the loo roll run out or create meals out of canned food.

Not that he didn’t have a point about the decaying sweet corn under the fridge.

But inevitably something has to give when we find our backs against the wall and the stress levels begin to escalate. My rule of thumb for coping with stress is to prioritise, and those activities that I derive the least pleasure from (like exercise and housework), have to be put to one side.

It’s quite amazing the squalor one can become accustomed to when push comes to shove.

I used to be proud of how organised my chaos appeared, but these days even my chaos is struggling to breathe. And the reality of ‘mum can’t do everything’ has hit the family hard. Because the bed linen doesn’t change itself and the clean washing doesn’t actually shimmy its way from the laundry to their drawers.

I admit that I’ve been putting myself first for a change.

After fifteen years of child-rearing, when at times I felt as though I had lost my own identity and become just someone’s Mum, I want some ‘me’ time now.

But now that I’ve put myself first, I feel guilty that I’m letting everyone down. Isn’t it strange how we women always feel like we’re failing?

Is ‘having it all’ actually worth it?

So there’s currently an embargo on cleaning in our house.

Anyone who needs a shirt ironed or food cooked can either hire a cleaner or do it their bloody selves.