The Question That Divides A Nation of Parents Of Teenagers

A lot has changed over the past thirty years in terms of what teenagers can and cannot do. 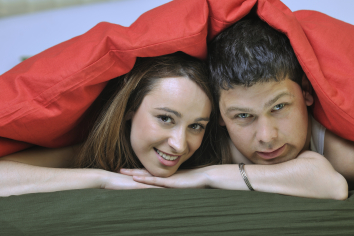 But nothing sets the cat quite as freely among the pigeons as the question of where parents stand on sleeping arrangements and privileges in the homestead, once teenagers enter into relationships.

As in, whether or not they can sleep with their partners under the family roof? Mainly because no parent likes to think of their kid shagging…actually, ‘shagging’ per se.

This dilemma has come up with Kurt recently, and although one tends to be a million times more lax in just about every parenting decision that ranges from piercings to curfews when it comes to the second or third child, the answer to this problem also has to depend upon the maturity as well as the age of your child.

The old man and I came from very opposing parenting rules when it came to sleeping together in our parents’ houses. His parents were older and stricter; his mother, a Catholic who wept the first time we went away together, made sure we didn’t share a bed (knowingly) in their house until after the wedding ring was firmly in situ on my finger. Whereas my father sat at the opposite end of the spectrum. A young parent, who found himself newly single again in his late thirties, (about the time I was entering my own first serious relationship), it would have been difficult for him to play the Victorian father in relation to my moral code when I never knew what was going to be at the breakfast table; and I’m not talking about the cereal.

From this first serious relationship, my father was straight with me and informed me that he’d prefer it that if I was going to do it at all, I ‘did it’ in a bed rather than the backseat of a car; although that concession was obviously only if I was in a committed relationship.

And I never abused his trust.

We took a similar view with our own kids, which wasn’t difficult with NC as she was well over the age of consent before boys became more important in her life than Harry Potter and the periodic table, and as The Astronaut is a few years older than her, it felt natural to allow him to stay over once she was ready.

Kurt has not had what I would describe as a committed relationship thus far. Many lovely girls have passed through his young life, some of whom have lasted more than a couple of hours, even though Kurt’s poor concentration skills make it hard for him to maintain focus on any one girl for very long. Therefore, when he suggests that he should be allowed to have girls stay over because NC had boys stay over at the same age, it’s hard to explain my reluctance.

It’s not a problem for me that Kurt is only capable of casual relationships at the moment; many of the girls in his social group seem only to want FWB relationships, too. (And by the way, the new term for ‘friends with benefits’ is ‘Fuck Buddies’, which frankly makes my skin crawl). Monogamy doesn’t suit everyone, just as long-term relationships don’t, but this is our house and I refuse to be forced into my dressing gown for  a different girl every week.

And then there are all the extra towels to wash.

Kids stay at home longer these days and become sexually active younger so we parents have been put in an awkward situation. I don’t want Kurt shagging in public toilets because he has nowhere else to go, but equally, I can’t condone him bringing any girl home and treating us like a knocking shop.

I have to put on trousers when I leave my room even when The Astronaut stays over, and I like living in a tee and big knickers in the summer with this heat and associated hot flushes.

I remember some of our friends being horrified when we let The Astronaut stay over the first time in NC’s room and sensed some real dissension. Interestingly, though, most have caved on this issue with their second children. You find that if you try to maintain your Victorian principles in this arena, you risk never seeing your kids again. They are terribly inclined to stay over at the house that lets them shag in a bed and provides them with the best breakfast.

What’s your position on this?