The old man lost weight while we were away – which is obviously grounds for divorce – and as far as I can see there can be no biological culprit of this inequality, other than my old friend menopause.

Because we ate mostly the same quantity of food while we were away – if you don’t count that afternoon tea I scoffed with my tiniest girlfriend who managed to put away almost three tiers of cakes as well as vats of bubbly and still looked enviably Hobbit-like the next day – BITCH!  He also drank a fuck-load of bitter and became particularly partial to the Magnums my dad had foolishly left in his freezer. He’s SO out of the will.

Since we’ve been home, the scales flinch every time I go near them, and I’ve decided that Sunday night is bad enough without that added level of pain. And if I’m honest with mysef, the extra kilos were probably worth the two weeks of gluttony enjoyed in a capital city not usually known for its gourmet food fare.

Meals that were stand out were not necessarily the most expensive – take the falafel kebab I demolished at Camden Market or the Tuna Salads from Pret A Manger that became our staple lunch in an effort to save money and calories, but it was the diversity of food we tried that made it so memorable. That’s the great thing about holidays – how all your usual disciplines float away in a sea of ‘don’t care’ petulance once you look at a menu.

There was the hangover food, which after classier nights was usually a croissant or two, posing in front of one of the trendy bread shop/cafes, dotted down the Kings Road.

And then there were the not so classy mornings when we had both lost the will to live and only animal fat would reach the spot, courtesy of a good old-fashioned ‘that’s what Statins are for’ English breakfast.

The dinner at the wedding of the year was pretty special and included this wonderful dessert which I had two of because (sadly!) my brother was so nervous about his speech, he couldn’t eat a thing. I might have also had his beef and lobster!

And talking of cakes, can you believe I freaking well MADE these macaroons at a cooking class with my sister? Although if you speak to her she will say that these perfectly round ones were in fact her batch because me and piping bags…well, let’s just say that we’re not the best of friends. But I won’t give too much away about that day because I have to dedicate an entire post at some point to our cooking class and how we finally managed to make our Chef smile…at us, rather than with us.

Seared tuna is my current foody passion and I managed to source ocean loads on this trip – this school came from a little French restaurant in Earls Court.

But the repas extraordinaire has to go to the tapas we shared with my brother and his family at a little place in Chelsea called Tendido Cero. Of course I knew it would be a memorable experience as soon as I saw the art work … 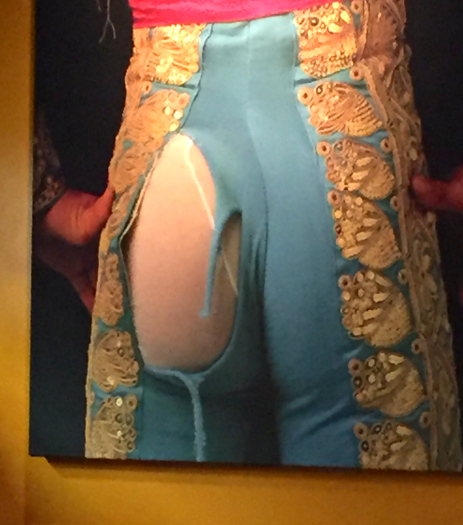 But even that much promise didn’t prepare me for the quality of the food. Even traditional favourites such as Patatas Pravas were pimped into these tempting bites of potato encrusted deliciousness with the mayo and tomato sauce inside.

Patatas Bravas, if you please…

The Gambas Al Ajillo were frankly sex on a plate, as was the Tortilla Patata and I haven’t even got photos of the lamb because by that point the old man was giving me that ‘put your phone away’ look, which was the most succulent, young meat I’ve tasted since my twenties. 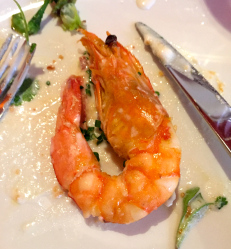