I’ve always believed that there’s enough unwanted hair on women’s bodies to deal with at this stage of our lives, without us having to go through the pain and cost of getting our fannies waxed every few weeks. 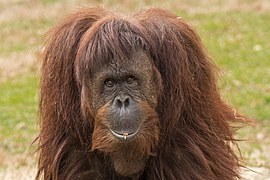 I think SOME body hair is attractive

I reckon I could start a profitable business in wigs if I have to shave down there as well.

But from what I’m led to believe on Social Media, those of us who prefer the kempt garden as opposed to the shiny limestone courtyard are now in the minority, so I’m getting a bit of a complex in the communal showers at the pool.

When did this Brazilian conspiracy happen? When did we move from the hirsute Chewbacca look of the seventies to Gollum, without me taking on board that my thatch is now deemed demode.

To be honest, I’d assumed that the rise of the Brazilian was a phase, something silly that Gen Y did – not some new beauty expectation of all of western womankind.

And those women that do it, insist they do it because they prefer it, (which I find hard to believe when it’s akin to tortures developed in Guantanamo Bay), and nothing to do with the preferences of their partners as some of us more skeptical feminists suspect.

I get that the invention of barely-there briefs and g-strings makes it harder to contain those rogue pubes. Which is why I’m all for some DIY landscaping – and not for the old man’s benefit I hasten to add, but because I’m a swimmer and errant pubes might affect my speeds.

But getting rid of the whole shebang? It’s just not right.

Her innovative take on life is that there are four things every woman should have and one of them, is what she prosaically describes as a ‘…a proper muff. A big, hairy minge. A lovely furry moof that looks – when she sits naked- as if she has a marmoset sitting in her lap. A tame marmoset, that she can send off to pickpocket things, should she so need it – like that trained monkey in Raiders of the Lost Ark.’

Moran goes on to discuss how we are living in an era of ‘pube disapproval’ and questions how we got here.

Because if I have to groom the dog, surely these days of equality demand that the old man go ‘metro’ and wax his tackle too? (gags). It might give him some definition – not that one wants to turn up the spotlights on the penis, which requires some natural shade to hide its fugliness.

To be fair, though, I can’t imagine that the fully exposed, ageing female vulva could ever be deemed a model of great beauty.