We’ve been through a lot of stuff with our son Kurt, as many of you know, and I can’t deny that there have been occasions when I’ve felt a tad wistful as I’ve walked down the street and spotted groups of clean-shaven, preppy-looking boys in their Polo shirts and boating shoes. 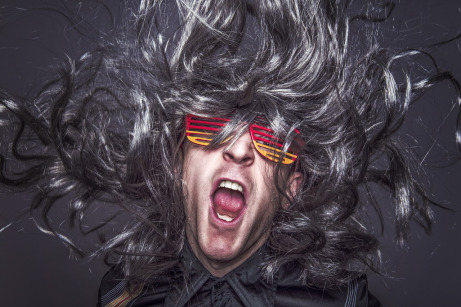 The weight of loss at my son’s refusal to conform was brought home to me the other day when I took Kurt shopping for some new clothes. Well, I say ‘new clothes’…however Kurt’s shopping destination of choice is an inner city suburb in Sydney called Newtown, a hip, trendy neighbourhood that you’d hate to find yourself in alone after 7pm unless you’re between the ages of 17 and 23, (hence stupid enough), armed, a drug addict or an impoverished student.

Kurt has always had an individual style. I remember that we went through his Dalmation phase when he was four or five, when he insisted on wearing a dog costume everywhere he went for at least two years; then there was the phase when he refused to wear anything other than NC’s summer school dress, (until the day the old man decided that enough was enough after Kurt paraded it in front of all our friends at a dinner party), and finally there was his Michael Jackson year with that much crotch-grabbing I wondered at one point if he’d ever be able to have children.

We have recently reached his ‘impoverished student’ phase, even though it must be hard for him to carry it off when he lodges with us in one of Sydney’s more exclusive suburbs.

Looking back, we all went through this stage. I remember wearing sexless, baggy tee-shirts and ripped jeans at university, in fact anything to disguise the fact that I was a middle-class girl with breasts and hips and not the working class heroine who could talk about the unfairness of life with some authority that I aspired to be. However, in those days we shopped in charity shops to earn our badge of poverty, unlike Kurt, who shops in vintage stores. And we all know that whenever you add the ‘vintage’ label to clothing, it doubles in price.

What this means is that I am effectively paying the same money for second-hand clothes as I would pay for the equivalent new clothes in a high street store.

I wouldn’t mind so much if his choice of ‘vintage’ wasn’t always the most deplorable, kitsch, eighties-style, insult to fashion you can imagine – the sort of shite you beg, steal and borrow for an Abba party. Yes, I’m talking shell suits, headbands, patterned knitted jumpers and cardigans and button-fly Levi jeans.

It hurt me physically to part with the cash on the day and I sensed that even the heavily pierced assistant with the purple hair and tattoo sleeve felt some empathy for me when I moaned about it, sounding every inch as middle-aged as I felt while Kurt writhed with embarrassment beside me.

Just another stage, I reassured myself as we left. I know I need to encourage my son’s freedom of expression but it did hurt to watch him leave the shop looking like he needed new clothes.