It’s been a productive week. We sold our old house, finally moved our furniture into Gotham and made a long overdue trip to Ikea.

The words ‘flat-packed’ and ‘self-assembly’ instill almost as much fear as the word ‘foreplay’ in grown men, yet twenty-five years after my first Ikea purchase for our very first flat in Wimbledon, I am still buying Ikea furniture.

Apparently, an increase in earnings and overall improvement in lifestyle has failed to increase our spending when it comes to furniture in the same way that it has with any new Apple technology. (The new IWatch is most likely winging its way to our house as I write).

Hence, I still shop at Ikea.

But every time I buy furniture at Ikea, our divorce becomes that much more imminent. It’s not the pressure of the purchase, it’s the act of self-assembly that pushes us over the edge. Every time we erect (Yes kids, I did say that word, just to piss you off) Ikea furniture, we always swear that we will never do it again.

And this time was no different.

The house sale obviously justified a celebratory purchase and my mission at Ikea was simple: to find a cheap table and chairs for the kitchen. I was afforded the generous budget of a whole $200.

Not a problem, I thought.

Nerd Child and I love Ikea and at the outset of every Ikea trip, we are enthusiastic members of Ikea’s ‘one big happy family’, fully embracing of the Ikea culture and shopping experience.

Nevertheless, for the unconverted to the church of Ikea, research has shown the following:

This trip certainly looked as though it would live up to expectation. The meatballs and gravy hit the spot immediately and Nerd Child downed the requisite free Coke refill with gusto, within the first ten minutes. And so we began our journey, meandering aimlessly around the room setting section first until we eventually located the tables and chairs.

Within two minutes we had dismissed the $200 sets as being too ‘student’ when I fell in love with a painted Scandinavian style set, much more suited to our little city terrace. And only $400 over budget. Lengthy negotiations ensued on the phone, (the old man being rather unfortunately in a VERY IMPORTANT business meeting when I interrupted him with my urgent call), and the budget was eventually increased to $600, the sole condition being that I assemble (ERECT) the dining set on my own.

And so Nerd Child and I passed on through the Market Hall, (the Pandora’s Box of useless junk that you simply have to have), and even though I could have really done with that Dudero (paper floor lamp), those Ingolfs (chairs) and Luddes (sheepskin rugs), as well as enough candles to get me and the whole of our street through Earth Hour and storage boxes to store the whole of the Australian public records office, we resisted. Almost. The picture frames were simply begging to be bought, as were the plant pots and the hall also proved to be the perfect opportunity to perfect pronunciation of our own particular Scandinavian dialect for the product names, as we went.

Collection of the ‘parts’ is the most challenging part of the Ikea experience, without a strapping male to help out; especially when one of you is incapacitated by a weak lower back. Fortunately, Nerd Child was uncharacteristically willing to be my serf on this occasion. That is until we found the table, which for some reason came in three separate parts, and was helpfully concealed on the floor at the back of our particular ‘location’. 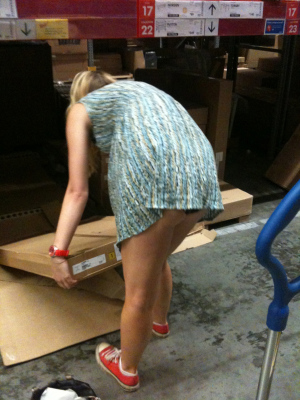 I watched as my daughter bent down in her itsy-bitsy student dress to drag the table sections out and have an awkward Bridget Jones flashing episode, exposing bum cheeks and polka-dot panties to the lucky Ikea male staff loitering (not helping) in our aisle. Luckily I managed to capture this visual on my camera (amid my guffaws of encouragement and laughter).

I excitedly set about ERECTING our table and chairs the next day.

The first chair took me 20 minutes, the second 15, the third and the fourth, 10 minutes. I was on an Ikea roll.

The table took us 5 hours.

Unfortunately, that table had more brackets and screws than Noah’s Ark and even I (an Ikea assembly professional) laughed nervously as I opened the boxes. A state of emergency followed and the old man was forced to throw out all conditions and ideals as we assembled the table for the six dinner guests arriving that evening. The last screw was screwed half an hour before our dinner guests arrived.

Real blisters for the first time in his life!

But it was educational, this, our latest Ikea experience. The old man increased his vocabulary of swear words and experienced his first ever blisters for manual work.

He has since informed me in no uncertain terms that our chances of divorce before we reach fifty will increase tenfold if I ever buy an all singing/dancing, ridiculous, extending dining table again.

In my experience, however, rather like childbirth, one quickly forgets the pain of a trip to Ikea and even the self-assembly afterwards. And inevitably ends up going back for more.